And then there was one… T+1

For most people, the investment industry’s plumbing – how we buy, sell, and pay or are paid for securities across time zones – is boring.  Like plumbing at home, securities-processing back-offices are out of sight and out of mind… until something doesn’t work.

And while a neighbour’s blocked drain won’t affect you, post-trade capital market problems can easily affect thousands of intricately interconnected counterparties, including pension administrators.  In 2017, Canada, the U.S., and some other countries reduced the standard time it took for debt, equity, derivatives, and fund transactions to settle – shorthand for simultaneously exchanging securities for payment after a trade is placed – from three days after a trade (T+3) to T+2.

The Americas were late to the T+2 party, adopting two-day settlement several years after Europe and a number of other developed countries. Now the U.S. is pushing hard for a one-day settlement cycle – the day after trade date or T+1.   And while both the move to T+2 five years ago, and the proposed 2024 move to T+1 require shaving 24 hours off processing times, moving to T+1 is a bigger, tougher systems and operational challenge.  Making it all the harder is that European and other foreign markets aren’t likely to move to T+1 any time soon, and portfolio/asset/fund managers will likely not see tangible benefits for some time (unless there’s a wake-up call, such as a massive clearing and settlement disruption).

Sometimes the agony of change outweighs the pain of staying with the status quo.  Two main reasons for Canadian capital markets to move to T+1 are:

1.  While Canada’s pension plans are among the biggest and most respected globally, U.S. capital markets dwarf Canada’s, so our American neighbours are calling the shots.  U.S. investment industry leaders point to net efficiency cost savings over time, from additional automation needed to achieve T+1, related collateral savings for investment dealers, and the benefits for all parties of a one-day reduction in counterparty risk.  Investors will receive their securities or money faster (although, if selling, they’ll also have to give up securities and cash earlier).  While interest in a shorter settlement cycle recently arose in the U.S. for market structure reasons generally absent in Canada, Canadian market stakeholders historically have agreed unanimously that the competitive and cost risks of not staying in sync with the U.S. settlement practice are considerably greater than those of working with the U.S. on the same settlement cycle.[1]  However, Canada’s pension administrators and many others in the Canadian capital markets also invest heavily in European and other markets, which will cause a settlement date mismatch and funding challenge.  How can this dichotomy be resolved?  Canada’s securities regulators said about earlier efforts to remove a day from the cycle: “We strongly support the need for the Canadian industry to migrate to [then] T+2 on the same timetable as the U.S.”  The same applies to a move to T+1.  Why? Due to inter-listed Canada-U.S. securities and the desire to avoid arbitrage.  While the number of securities listed on both Canadian and American exchanges is low, they include the most popular blue-chip securities of the biggest corporations worldwide.  The 235 equities listed in both Canada and the U.S. had average trade volumes of 700 million shares daily (July 2022), with over 437 million trading south of the border and 263 million to the north – reflecting on average a 60% American/40% Canadian interlisted split. 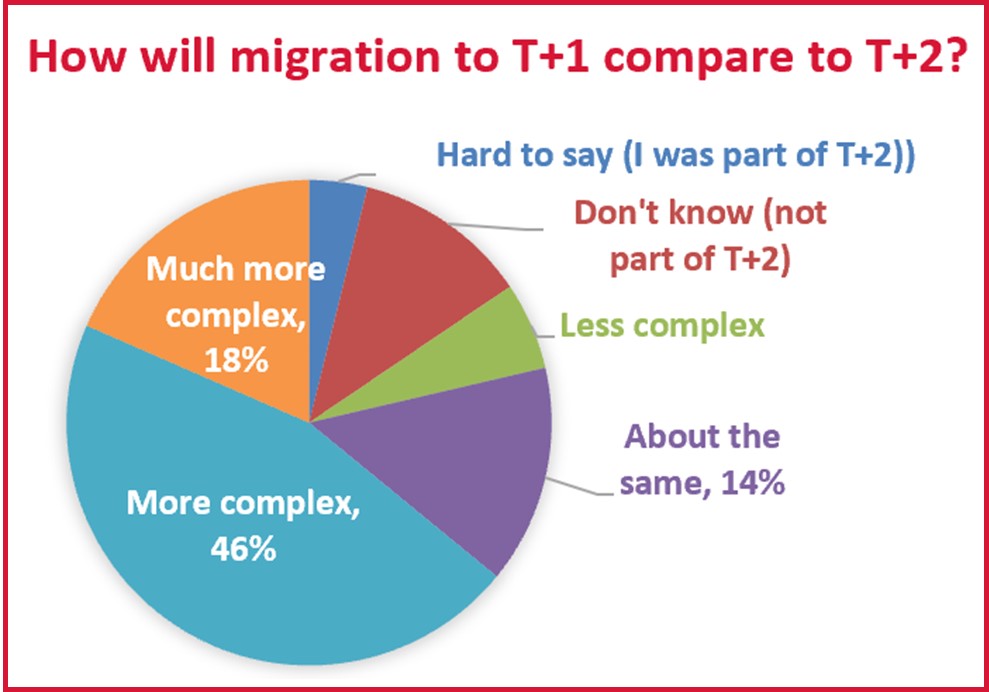 2.   Assuming the U.S. moves to T+1 as expected, all participants in Canada’s investment industry will be affected, whether they like it or not.  They must either move to a T+1 settlement cycle with the U.S., or adapt to an environment where Canadian and U.S. cycles differ.  One way or another, pension and retirement fund managers will have to make changes, even if only to stay on a T+2 cycle… that is, unless capital market participants, including pension funds (as well as Canadian regulators), are ready to accept more failed trades with the related dollar, opportunity, and reputational costs.   Most organizations can expect the cost of preparing for both markets going to T+1 to be less than preparing for not following the U.S. to T+1, because those wanting to remain on T+2 still will have to make adjustments and manage for U.S. trading.

What makes matters worse is that the transition for most firms will be more difficult than the move to T+2 (see inset summer 2022 survey results[2]) because there’s no longer an extra day to make trade corrections and do all the unseen things keeping the plumbing humming smoothly.  While some industry participants may find conversion relatively straightforward and enjoy immediate benefits, the majority will find it a major effort, with benefits longer in coming and harder to measure.  But it will avoid long-term risks, complexities, and costs of being on a schedule different from that of our biggest trading partner.  And we can expect European and other markets to follow after the U.S. moves – we’re just not sure when.

What are the biggest challenges?

For ACPM members, there are two major areas of impact:

What this means:  Pension funds and other investment managers must investigate and determine how to address cash management practices and process impacts.

What this means:  Expect extra pressure to confirm/match transaction details on T, and to correct errors on T or very early on T+1 – currently, under National Instrument 24-101, Institutional Trade Matching and Settlement, 90% of transactions must be and are matched by noon on T+1, but only 40% are matched at the end of T.  In a T+1 environment, 90% will have to be matched before 4 a.m. ET on T+1.  Pension funds and other investment managers must work with custodians and dealers to map out and understand current processes end-to-end to identify steps to eliminate or accelerate.

A host of other problems are emerging; for example, retaining trained staff, as the post-pandemic demand for good operations and technical staff makes hiring increasingly demanding.

Fear not, there’s help.  The move to T+1 will take place the same way as the 2015-2017 move to T+2.  The Canadian Capital Markets Association (CCMA), a pan-industry group including dealers, investment managers and custodians; securities infrastructure (exchanges, The Canadian Depository of Securities (CDS)); back-office service providers and vendors; and other stakeholders, is again coordinating the many moving parts.  Tools developed by the CCMA for the Canadian marketplace’s T+3-to-T+2 move, including the analysis and recommendations in the CCMA’s 2018 T+2 Project – Post-Mortem Report, are being updated.  The U.S.’s T+1 Securities Industry Settlement Implementation Playbook is useful. Industry associations, service bureaus, vendors, and others will help smooth the way. CCMA T+1 committees, open to all industry participants, are working and welcoming new members.

Also, there already is agreement on the necessary trade entry and matching schedule changes to meet T+1.  As well, there’s agreement on a T+1 Asset List identifying what securities are moving to T+1 (spoiler alert:  pretty much anything currently on the T+2 standard settlement cycle will move to T+1).  However, whether (and if so what percentage of) conventional mutual funds, segregated funds, and labour-sponsored investment funds (LSIFs) will move from T+2 to T+1 is currently still under investigation.  Unlike debt, equity and derivatives, these fund types don’t compete cross-border.

A coordinated effort by all industry segments is needed to achieve what will be required: systems, operational, and behavioural changes to move activity now mostly done on the morning of T+1 – enter data, allocate block trades, and confirm trade details – to before midnight on trade date and to settle in local currency when the global foreign exchange settlement practice, and standard securities settlement cycles of European and other major markets, remain at T+2.

That is the question and, aye, there’s the rub.  The U.S. Securities and Exchange Commission’s (SEC’s) proposed T+1 rule says compliance is required by the end of Q1 2024.  The largest industry associations in the U.S., as well as the CCMA, are pressing hard for the much less risky three-day 2024 Labour-Day weekend.  What will happen when an irresistible force (the SEC) meets a sometimes-slow-moving object (industry back offices)?  The best we can suggest is that age-old adage:  plan for the worst (March 31, 2024) and hope for the better (Q3 2024).

Where can I find out more?

A lot of new information, including proposed changes to Canadian securities rules, is expected to be made public between now and the end of this year.  Follow the CCMA on LinkedIn and visit the CCMA website at www.ccma-acmc.ca to find more information, or to get involved in a CCMA committee.  To sign up for a committee or the CCMA’s T+1 newsletter, please email info@ccma-acmc.ca.

[2]   CCMA T+1 Awareness Survey, June-July 2022, 104 responses including 34 (33%) identifying as buyside. The survey’s purpose was to determine where people think their organization stands in terms of T+1 awareness and preparations; provide a baseline against which to measure industry progress; and help plan Canadian T+1 efforts. 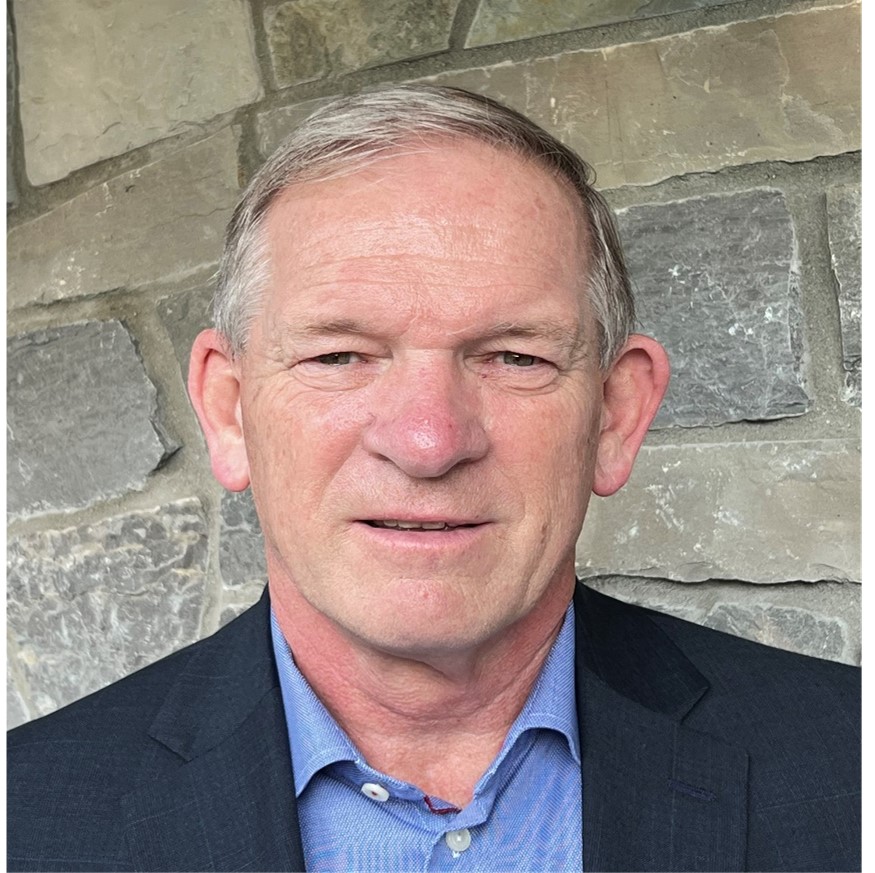 Keith Evans is Executive Director of the Canadian Capital Markets Association (CCMA).  Mr. Evans represents the CCMA in the co-ordination of the CCMA Board-approved initiatives.

Mr. Evans is a senior operations executive in the financial services industry, with extensive experience in clearing and settlement, corporate actions, and project management. He worked for The Canadian Depository for Securities Limited (CDS) for 36 years, most recently as Executive Director, Operations. There he was responsible for the day-to-day operations and strategy of Canada’s national depository and clearing corporation.

Mr. Evans led the Canadian financial industry’s transition from T+3 to T+2, which was successfully implemented in the fall of 2017.  Since then, he has been working with industry participants to support modernization of CDS’s systems for clearing and settlement, as well as for entitlement and corporate actions processing.  He now also heads cross-industry and cross-border co-ordination of Canada’s T+1 efforts.