The impact of scale: What can small and mid-size Canadian pension funds learn from the world’s largest institutional investors?

Typified by the successes of the large “Canadian Model” funds, there is an increasing belief within the investment community on the benefits of scale in asset management. The subject has been widely discussed in industry publications, consultant reports, and academic research. The size and source of the benefits however are rarely quantified. Doubts about the actual benefits of scale given this backdrop are understandable; large funds sometimes produce poor returns and bad news often gets more eyes and ears than good news. It’s difficult to separate anecdote from long-term proven fact.

Leveraging our nearly 30 years of large asset owner cost and performance data, CEM Benchmarking is able to cut through the noise. Presented below are excerpts CEM’s research paper: “A Case for Scale: How the worlds’ largest institutional investors leverage scale to deliver real outperformance”, the full paper can be accessed using the link above.

How much value do institutional investors really add?

To assess the success of a fund we focused on value added, the difference between a fund’s policy benchmark[1] and the actual return realized by the fund. Value added is the sum of both manager value added within asset classes and tactical portfolio decisions between asset classes. Value added has the advantage of being relatively agnostic to asset mix, enabling comparisons across funds.

At an aggregate level we find funds have outperformed their benchmark by 67 basis points (bps) gross of costs and 15 bps net of costs [exhibit 1] The evidence shows that large institutional investors can add value over long periods, even if more than 75% of the gross value added generated is eroded through costs.

Breaking down these results by assets under management (AUM) reveals:

Without exploring the sources of this added value, it is apparent that larger funds have been more successful in generating excess returns.

What is driving this increased value add? Our prior research has shown that the most important quantitative features of funds for determining value added are:

To estimate the impact of the three factors above we have conducted a simple regression analysis on gross and net value added in our database by year. We then aggregated the year-by-year results to form a big picture view of what drives success of institutional investors, the results of which are presented in Exhibit 2.  We performed the analysis in four steps to isolate both the impact of cost and the impact of allocations to private equity and unlisted real estate.

To start we performed the analysis inclusive of all asset classes before accounting for cost (Exhibit 2: Model A) which revealed:

The first two observations align well with our expectations based on the analysis in Exhibit 1, the latter is reflective of the fact that consider cost isn’t considered in this analysis.

When the impact of private equity and unlisted real estate are removed the results look quite different (Exhibit 2: Model B). Here, only the percent active remains as a significant contributor to gross value add, albeit at a lower level. From this we can deduce the following:

There are no obvious benefits to scale within public markets before accounting for cost;

For public market assets the data is clear; as you get bigger, costs increase slower than AUM which translates directly into improved net value added, even excluding the impact of private market assets. This reflects both the more favorable terms that large investors are able to realize from external managers as well as efficiencies in managing assets internally.

What does this all mean for Canadian Pension funds:

In closing, it is fair to say that the “Canadian Model” has sound empirical foundations.  It is encouraging to see regulators taking steps to encourage the amalgamation of smaller pension plans, even if these endeavors have so far mainly focused on the public sector and collectively bargained plans.  Pension stakeholders would benefit from these initiatives being expanded further.

[1] An investors policy benchmark is the return expected by an investor if they: (i) had an asset mix equal to their strategic asset allocation targets, and (ii) passively invested that asset mix. 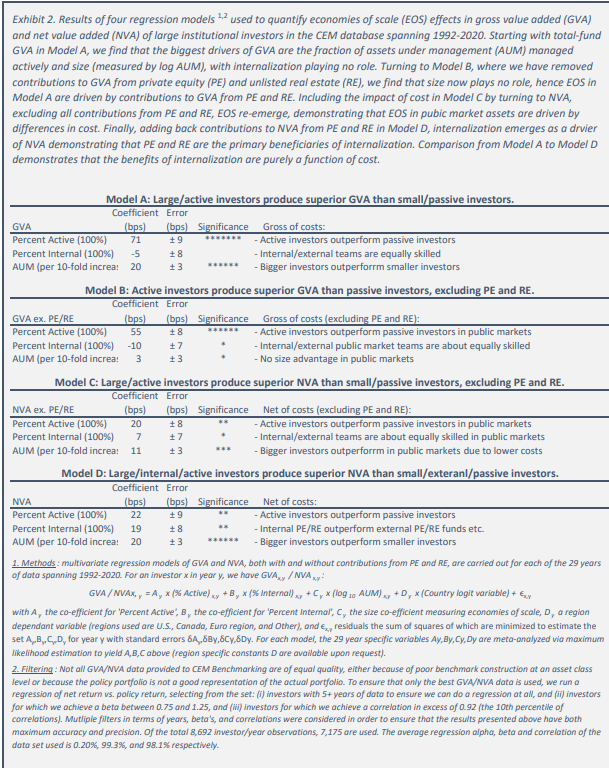 Michael has client relationship responsibility for several clients in each of CEM's services. Prior to joining CEM in 2017, Michael had a 16-year career in a wide range of roles within the pension industry most recently as a Managing Director at Manulife Asset Management where he worked with institutional investors in developing liability driven and real asset investment strategies. Michael spent the first 10 years of his career as a pension actuary and consultant in progressive roles at Towers Perrin and Mercer after which Michael joined Manulife where he headed the internal pension team with responsibility for the end to end governance of Manulife’s global internal pension arrangements.

Michael served as a member of Manulife’s U.S. Pension and 401k investment committee and was secretary to Manulife’s Canadian and US pension committees. Michael has an HBSc in Statistics and Actuarial Science from the University of Western Ontario.